“Getting Out of a Sticky Situation.” 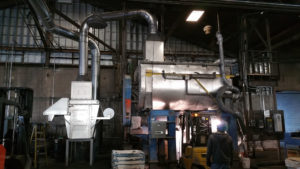 A raw materials processor approached SysTech to determine why their dust collector exhaust system was not working properly. The polyester bags in their CAMCORP baghouse were “plugging” or “blinding” with the life of the bags lasting only a few minutes of operation. The dust collected was submicron dry particulate and moisture laden air from a blender vessel. Once the bags “plugged”, capturing and exhausting the fugitive dust from the vessel was curtailed, resulting in large plumes of particulate entering workers breathing zones and creating a house-keeping mess in the manufacturing area.

In addition to the necessary process correction, the western Pennsylvania contract processor, was under a tight contracted deadline as they were handling a seasonal product (cold weather) and needed to have the new collection system up and running within a very tight timeframe. Forty-five days was the required timeline to provide a complete turn-key solution, including equipment manufacture and delivery, hood construction, installation, and startup.

Particulate Filtration from a Wet Airstream

The process involved a large industrial ribbon blender mixing a number of dry dusty compounds to a customer’s specification. When the compounds were mixed, an exothermic reaction took place resulting in a large temperature spike in the blended material and vast amounts of steam were created. The steam caused major issues in the facility: as the steam and dust cloud rose out of the blender it filled the upper areas of the facility and condensed, leaving sticky particulate on the ceiling of the building. The condensed mixture corroded the ceiling roof panels and dripped down. Workers in the area had steam obscuring vision and the dripping condensate created a hazardous floor work-surface.

Applying an air pollution control device to a dry or a wet airstream is most times a straight forward decision process. Dry dusts can be collected with a cartridge or bag style dust collector depending upon loading, temperatures and material physical characteristics. However, when the airstream contains a wet sticky component, treatment options are few. Wet scrubbers are typically applied, but create a slurry, needing to be removed and a wet scrubbing system can be high maintenance. Based upon the process parameters, SysTech proposed two treatment alternatives to the client, an Air Pollution Control Technologies Ultra High Efficiency (UHF) Filtration System as manufactured by Air Pollution Control Systems and a Packed Bed Wet Scrubber. After evaluation, the wet scrubber was rejected by the customer due to the initial higher price as well as additional unit maintenance costs.

The Ultra High Efficiency Filtration (UHF) System unit selected used a process specific indexing filter media and was constructed of 316 Stainless Steel. The unit had an airflow design of 5,500 CFM and a 50 gallon capacity condensate tank with a mist eliminator on the discharge airstream. The filter media used in the UHF is specifically designed and manufactured for the materials being collected. The application was a near perfect application for the UHF. The UHF unit allowed for both the removal of the steam and capture of the wet particulate. Steam naturally rises, so the key was to pull enough air off the process to overcome the upward movement while leaving the customer’s product in-place. A Lenze SMVector Variable Frequency Drive adjusted the fan speed to collect only the fugitive dust and continually adjusted the fan speed as the filter media became dirty and indexed. A 60 HP Cincinnati Fan and Ventilator Co. High Pressure fan was provided as the heart of the system, providing up to 5,500 CFM of airflow at a maximum of 22’’ W.G of static pressure in order to overcome dirty filter resistance. A custom control panel integrating all of these control components was included; the panel monitors the differential pressure across the filter media while in operation. The control panel was preset with low and high pressure set points, over time as particulate is captured and builds up on the filter media the roll advances automatically without a worker monitoring the system. This allows for a completely automated system; a “set and forget” type of operation. Once the filter media does reach the end of a roll, an alarm light notifies the workers to replace the filter roll on the unit.

The entire system was installed in a four (4) day timetable, including both mechanical and electrical phases. A 12 gauge custom canopy hood was designed and installed above the blender. As the airflow pattern moved through the UHF unit, the steam was purposefully run through a mist eliminator prior to being ducted to atmosphere. The mist eliminator was attached to a “P-trap” allowing buildup of liquid to be released without operation shutting down.

The customer has been successfully running this system fourteen hours a day, six days a week with filter media rolls lasting a full week. Aside from a minimal filter change out period, there is minimal maintenance and upkeep of the system, allowing personnel to focus on production, not on equipment upkeep, translating to additional productivity.

When a project or problem arises and feels daunting, we’ll make sense of it. Call us at 800-456-9460 to get more information.